And what about network marketing?

Set your GOALS to SUCCESS.

Welcome to my world!

Having a goal is a vital step in achieving your dreams! You have something to aim for – a target. While there are no guarantees, it has been reported that your chances of success increase significantly when you write out your goal, verbalize as well as feel it – immerse yourself in the sensation you would feel on its achievement. The more senses you can integrate into your goal setting, the better.
Think about it: everything in existence was once someone’s dream. The Wright brothers dreamt of flying and started doing everything towards it until they did; so much so, the people who first heard about the flight thought it was a hoax.
By popular accounts, Edison took 10,000 tries before he produced the incandescent light bulb. The principles were there but no one had put them together until he had one particular Eureka moment.
It took the goal and commitment set by Godfrey Hounsfield, an electrical engineer, Allan Cormack and their team in England to bring the CAT scanner to reality, and propel medicine into the digital era and a new phase in diagnosis, for which they won the Nobel prize.
Where would we be without airplanes, lightbulbs and CT scans if someone hadn’t first dreamt of the possibilities?

If you have not set a goal, you are much less likely to do anything. You have a passing thought which floats away, only to be recalled when you see something on television or an awards show and think “I had that idea a few years ago. I could’ve been the person getting recognition for that invention or concept.” Woulda, Coulda, Shoulda!!!!
You will not be rewarded for a dream that stays in your mind as a 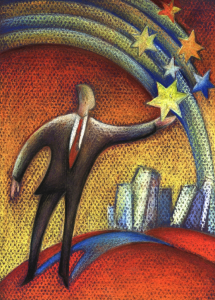 dream: but if you bring that dream to reality or at least move strongly in that direction, you will feel rewarded both by the journey as well as the destination. Most successful people will tell you that their greatest enjoyment came from the challenge; the journey, and not the destination itself.

My belief is that we all have a purpose and our job is to figure out what that purpose is and set that as our goal. It may mean being a great parent, a caring teacher or a rocket scientist. Whatever that is, is unique to you.

There is a great quote from Alice in Wonderland which sums up my thoughts about goals. It is a conversation between Alice and the Cheshire cat. Alice asks “Would you tell me, please, which way I ought to go from here?” The Cheshire cat answers “That depends a good deal on where you want to get to.” Alice responds “I don’t much care where.” To which the Cheshire cat replies “Then it doesn’t matter which way you go!!”

Start immediately – Write down your goals!